What's the Best Bike Lock? There Isn't One. 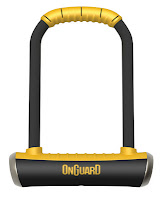 Don't get me wrong. Some bike locks are better and more theft-resistant than others. But no bike lock is truly theft-proof—and you may be surprised at how quickly a bike thief can cut open even the strongest U-locks using one simple, inexpensive tool.

As I detailed in my AMC Outdoors article, It's a Lock: Invest in Bike Security, cable locks and chains can be severed in seconds with a pair of bolt-cutters. U-locks are much tougher and can generally withstand an attack by hacksaw or bolt-cutter; they are generally considered the most secure option.


But even the heaviest duty, most rugged U-lock is no match for a cordless angle grinder. In a recent test by the folks at Gizmodo.com, four common U-locks (around $50 retail) were used to secure a bicycle and then subjected to the abuses of a hack saw and inexpensive cordless angle grinder (a $40 Ryobi 18-volt lithium-ion tool, to be exact; total cost, including the battery: just under $100).

The testers selected a representative model from four common bike lock brands—Kryptonite, OnGuard, Abus, and Blackburn—and then ranked them based on their resistance to being cut. The results? Most withstood the hacksaw, but the angle grinder cut through all of them in less than two minutes. (The OnGuard Pitbull STD, pictured above, was the best of the bunch.)


So what's the takeaway? A bike lock is a deterrent to theft, some more so than others, but no bike is ever truly safe when it's locked up on the street. As the testers noted: "Lay out $100 for a power tool, and you could just go get a new bike. Any bike you want. Again and again." Doh.

Learn more about cycling gear and accessories in these recent posts: