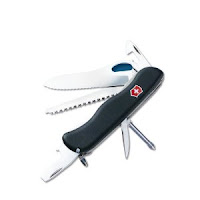 Victorinox produces several hundred styles of Swiss Army knives. Dozens of different tools are available on the various models. Do you have a favorite style, color, or tool preference? I do.

For years, my go-to knife has been the One-Hand Trekker ($53). Unlike most other styles, it features a locking blade that is nearly an inch longer than the standard Swiss Army blade. It is easily opened one-handed; your thumb nestles neatly into the raised hole on the blade and provides ready purchase for opening.

The body of the knife is also contoured for a better grip and its larger 4-inch size fits much nicer into large hands like the mitts I've got dangling at the end of my arms.

The One-Hand Trekker features some basic tools, including a can opener, bottle opener/flathead screwdriver, awl, saw, Phillips head screwdriver, toothpick, and tweezers. I've used all of them at one time or another, though the can and bottle openers have been the most useful. The saw is the only thing I find extraneous and could do without (I wish they made an option that had scissors instead).

If you like the locking blade but are looking for different tools, or just the blade, or one in camo colors, Victorinox has a whole line of locking blades that use the same basic body shape as the One-Hand Trekker.

If you prefer something slightly less bulky, I usually recommend either the Climber (pictured) or the Super Tinker (both are $36). They're essentially the same thing and have mostly the same tools: a large and small blade, scissors, bottle opener/flathead screwdriver, can opener, awl, hook, tweezers, and toothpick. The only difference is that the Climber features a corkscrew while the Super Tinker has a Phillips screwdriver instead.

"Equipped” is an AMC Outdoors blog, written by Matt Heid