Just when you thought you had everything. Some wild new gear is hitting the market this year. Giant air bags that deploy in an avalanche. A backpack with a built-in tent. Vests that inflate with noble gases. They might not be on your must-have list, but it always amazes me when manufacturers come up with entirely new gear genres.

Here's the idea. You're caught in an avalanche and tumbling down the mountain. If you get buried more than 6 feet deep, you're dead—there's no way you can be located and dug out within the short (30-60 minute) time frame where survival is possible. If you end up close to the surface, however, your odds of survival are greatly increased. So you pull the rip cord on your avalanche airbag, which rapidly inflates and buoys you toward the surface. 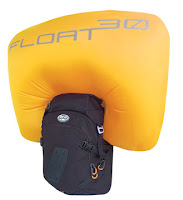 Avalanche airbags are contained within specialized backpacks. Used to be that only one manufacturer made such a thing (ABS makes four different models), but now you can select from models by Backcountry Access (the Float 30) and Snowpulse (multiple models available). Expect to shell out $600-$1,000 for this technology.

Established in 2008, Idaho-based TentPak offers "the world's first patented, all-in-one, grab-and-go, tent-backpack system." The basic idea is that each of the company's packs comes with a tent neatly contained in its own compartment at the bottom of the pack. Not the lightest weight option (12-14 pounds for tent and pack), but the convenience and price point ($150-$350 for the whole shebang) make it an intriguing option. A line of 12 backpack models are available, including several with a four-season expedition tent option.

It's a noble idea behind this company. This start-up gear maker uses noble gases—argon, xenon, and krypton—to provide the insulation in its line of vests. Wearers can inflate the vest for more warmth, or deflate it when they start to heat up. Noble gases are already used as an effective insulation in windows, cold-water scuba suits, and other applications. But it's an entirely new breed of insulating technology in outdoor gear. The big drawback is that they require the use of their small "Hotshot" gas canisters for the system to work. Currently only available in vests; the Amphibian (pictured) runs $200.