Hello from Northern California, where I’m in the San Francisco Bay Area updating one of my hiking guidebooks for a new edition. While here, I’m also taking advantage of the opportunity to go surfing with my brother, a lifer Californian who spends tons of time on or near water, either surfing, fishing, boating, or some combination of the three.

Tons of time on the water also means tons of sun and UV exposure, plus the sunscreen-washing effects of often turbulent ocean waters. My brother has tried the gamut of sunscreens in search of the best, longest-lasting sunscreen for use while surfing, including multiple brands that tout themselves as designed for water use. None of them stand up to the rigors of a multiple-hour surf session—except for one.

Vertra Elemental Resistance produces a line of hard-core facial sunscreen products designed especially for the rigors of surfing, including my brother's choice: Shelter Kona Gold. The stuff comes in a lipstick-esque container about the size of two standard lighters stacked together. Similar to lipstick, you twist a knob on the bottom to spin up the tube of thick, thick sunscreen, which can then be applied directly to the face. 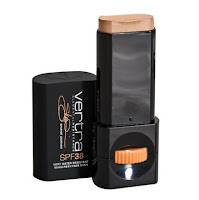 I love the sleek design of the sunscreen case, which has very little text on it. In fact, the only text on it (other than the name) is a short one-liner identifying the product: a “very water resistant sunscreen face stick.” Unlike regular sunscreens, Shelter Kona Gold is an opaque beige that goes on your face as, well, opaque beige. It looks a lot like make-up foundation actually, an amusing look when coupled with the svelte appearance of a form-fitting wetsuit.

After rubbing the sunscreen in, the dark brownish color dissipates slightly, but not much. It's deliberately designed that way to provide an obvious visible indicator of its presence, and an easy-to-spot indicator when a re-application may be necessary. (It is also available in a white, translucent version: Shelter Translucent.)

Appearances aside, the stuff works. Plus, because you can clearly see it on your skin, it’s obvious when/if it’s still there. And after nearly two hours of active surfing, including numerous trips through the whitewater of oncoming waves, the sunscreen was clearly still there on my brother’s face. The drawback of having such effective sunscreen is that you have to really work to get it off at the end of the day—we’re talking a full facial soap-up at the bathroom sink or in the shower to fully remove it.

Here in California, you can grab a stick at many of the local surf shops. Elsewhere, the internet is likely your best bet. At $20-$30 a pop, it’s not cheap, but if you want the most heavy-duty, waterproof sunscreen on the market, it’s worth every penny.