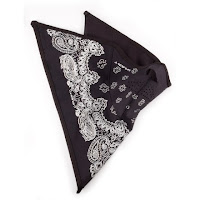 A lot of new gear is arriving in time for the holiday season. Three items caught my attention this week:

Seirus Combodana Face Mask
I've had a basic Seirus face mask (or "Masque" as their brand name goes) for many years. It works great for wind and winter, and has handled a lot of time above treeline in the winter Presidentials. I'm also a huge proponent of neck gaiters, or at least some form of neck protection for the precious heat coursing through your jugular.

In winter, one of the problems with most neck gaiters is that they bunch up way too much in the collar area, where you can easily have two or more overlapping layers. The Combodana is essentially Seirus's basic face mask with a lightweight wind-proof fleece for the neck, which happens to be patterned like a traditional bandana. Quite the look, but quite the function as well. The lower part protects your neck nicely from wind, without any extra materials on the back. $25. Available in multiple colors.

Seirus makes a lot of other nice winter stuff, and they specialize in winter head, face, and neck wear. Funny website though—just a pdf of their catalog. 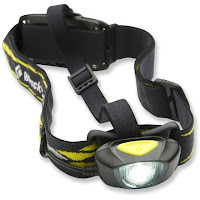 This week's new entry into the headlamp market is this nifty 3.5-ounce package. Unlike most headlamps, the Sprinter features a slim rechargeable battery pack on the back of the head, with a very lightweight—and bright (up to 68 lumens)—LED on the front.

The light adjusts across a range of brightness levels. Simply hold down the on/off button and the light will slowly dim to the desired level. It also features a small blinking red LED on the battery pack on the back of your head—nice if you're running or walking at night for increased visibility. Downside is the limited battery life on max bright (5 hours), with up to 64 on low. $80.
ACR SARLink 406 Personal Locator Beacon 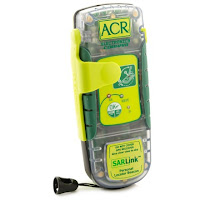 ACR Electronics has been forced to step up and lower their prices for their latest generation of Personal Locator Beacons. Earlier this year, McMurdo introduced its $300 Fast Find PLB series to the market, significantly undercutting ACR's long-standing PLB price point ($500-$600).

The new SARLink is lighter weight than its predecessor, the ACR MicroFix, (8.9 versus 10 ounces) and adds a few minor improvements: a flashing strobe to help rescuers more quickly home in, the ability to test GPS acquisition up to 12 times (versus once for the Microfix), and a new clear housing that let's you see all the electonic guts inside. The current version sells for $400, $200 less than the MicroFix.